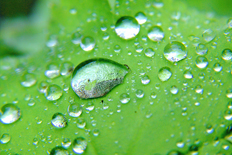 Through photosynthesis, do plants take light energy from the Sun, convert it into mass and actually add to the overall mass of the Earth?

The person who asked this question is probably referring to Einstein’s famous equation E=mc2. However, plants are no particle physicists and cannot convert energy into mass. What they can do better than any human chemist though, is to capture the energy contained in sunlight and use this to combine two of the most abundant compounds on earth, carbon dioxide and water, into glucose.

Glucose, or grape sugar as it is also known, is used by living creatures ranging from yeast to elephants as a carrier of readily available energy. The only ones that can actually make it from scratch (or rather CO2 and H2O) are plants, however.

To do this, they need energy and a catalyst, because these two compounds don’t spontaneously combine to form glucose, as everyone who has ever drunk a glass of sparkling water knows. The two partners need to be coaxed together, and get ‘excited enough’ before they will form a more permanent bond. The matchmaker in this case is called chlorophyl.

Chlorophyl is the substance that gives all leaves their green colour. It is a protein which is able to capture the energy contained in sunlight, and use this to ‘excite’ CO2 and H2O to such a level that they are willing to combine into a new substance called glucose. The actual equasion describing this chemical reaction is depicted on our homepage.

The important thing to note here is that glucose becomes a ‘carrier’ of the energy that was used in its creation. When you run up the stairs and ‘burn’ glucose in your muscles by combining it with oxygen, this is just a way to release this energy to power your muscle cells, and the glucose is reverted back to the CO2 and H2O it was made out of by a crafty plant. When you stand panting on top of the stairs, you are releasing them back into the world, where they will be ready for absorption by another plant to start the whole cycle again.

So, in conclusion, no mass is being created by plants, they just temporarily capture energy into mass.

13 Comments - Leave your own