The longest recorded tennis match in history was at the 2010 Wimbledon Championships, and took a total of 183 games played over three days between 22 – 24 June. France’s Nicolas Mahut and American John Isner’s match lasted 11 hours and 5 minutes, about 10 times longer than an average singles match.

So how do tennis players have enough energy and stamina to play over such long periods? 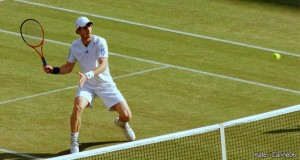 Currently ranked British No. 1 and World No. 2, tennis player Andy Murray has a very strict diet and exercise routine to help him remain at his best.

According to The Sunday Times, Murray eats six meals a day and consumes 6,000 calories, which is more than double the recommended requirement for an adult male.

To make sure he performs at his best, keeping hydrated is vital and Murray gets through six litres of water a day. Alcohol and sugary drinks are banned.

It’s not all about what Murray eats though, it’s also about exercise. Murray’s trainer Jez Green helped him put on 1.5kg of lean muscle between Sept and November 2012 as well as improving his endurance by training for 5hrs of per day.

But it’s not all about what Andy eats, drinks and how much he exercises. It’s also about an incredible determination and willpower to be his best.

When discussing Murray, his trainer Jez Green, as quoted from the Daily Mail says;

He is a ridiculously natural athlete and, when you combine that with the work ethic he has, you come up with something very special.