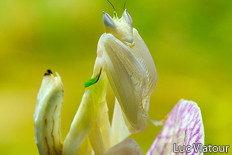 The first part of the question can be answered in the affirmative; yes, there is a genetic link between insects and plants. In fact, there are genetic links between all living things. This is one of the amazing facts modern biology has revealed to us.

Then the second part: can this link be an explanation for mimicry eg. Mantis orchid? This is almost surely not the case. To find out why, we need to have a look at the relations between all living things according to the theory of evolution.

Life is believed to have started as single cells, probably not very different from some of the more primitive bacteria that are still around today. There is lots of debate about how this exactly came to pass, and some scientist called ‘synthetic biologists’ are trying to re-create living, replicating cells from simple chemical building blocks.

These single cells are the root of the ‘tree of life’ which shows how life has evolved over millions of years, from this starting point into all the living things around us today. The branching point between animals and plants happened a long time ago, so the mantis and the orchid are on branches that are very far apart.

This means that although they are related, they are very distant relatives, i.e. they will not share that many genes which could explain the similarity in appearance, as in the case of humans and chimpanzees, where approximately 95% of the genes are similar.