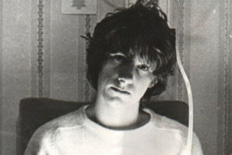 A portrait of the artist as a young man. On the right is a photograph of the collection of atoms which went by the name Michael de Podesta circa 1980. In the same way that Manchester United still exists, but no longer has any players from the 1980′s, so Michael de Podesta ‘exists’ but retains none of these particular atoms or cells. What does that mean? Michael takes a thought provoking look back…

I remember being an undergraduate.  And at about the time the image above was captured, I recall imagining being very tiny – smaller than an atom – and moving through the atoms of ‘my body’. I remember asking: How would I identify the edge of ‘me’?

On this tiny scale, the nuclei of atoms would be far apart, and so I would barely be able to tell whether I was inside an atom, or in-between atoms. The edge of ‘me’ would be very hard to detect: it would correspond to nothing more than a relative decrease in the frequency with which I came across a nucleus. And also to changes in the types of nucleus I encountered – with many fewer carbon nuclei in the bits that were not ‘me’.

The upshot of my imaginings was that I decided that the concept of an ‘individual’ was one that only made sense when viewed on a large scale. On a small scale, all one would see would be essentially chaotic variations. This was a pivotal moment for me,

From this journey of my imagination I understood (pace any high energy physicists out there) that in same way that a microscopic explorer would never deduce the existence of the phenomenon I called ‘me’, so looking at the components of matter would never – even in principle – result in a ‘theory of everything‘.

I was reminded of this insight today while reading an article in the Scientific American on bacteria. First I was shocked to find that: In the human body, bacterial cells outnumber human cells 10 to one. The article then explained that many dis-eases were not caused by ‘foreign’ bacteria, as had at first been imagined. Instead many dis-eases arose from a disturbance of the ”social’ balance between the vast populations of bacteria that live on (and within) our bodies.

For example, the microbe Heliobacter Pylori is associated with ‘causing’ stomach ulcers, but in normal life Heliobacter Pylori lives happily in our stomach. And it helps us by producing the hormone ‘ghrelin‘ which produces a sensation of ‘satiation’ after eating. Similarly, the bacterium Bacteriodes fragilis stops inflammatory T cells from damaging our bodies, and ts absence could be associated with auto-immune diseases.

And so biology brought me back to same question that physics had raised 30 years ago. What do I mean when I use the word ‘I’? Physics told me that ‘I’ was only blearily separated from the atoms around ‘me’. And now biology tells me that ‘I’ am a combination of my genetically unique cells, and a vast army of bacterial ‘hangers on’ that have come to live with ‘me’ essentially by chance.

The concept that dis-eases were not caused by individual poisonous foreigners, but instead resulted from an imbalance in a diverse social network resonated strongly with me. And so I thought I would share that with you. Goodnight.

Further reading. This entry was originally posted on Michael’s blog.