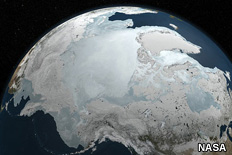 It’s a great question, but does not have a simple answer. There are two parts to the answer and to understand these I need to ask you to distinguish between the ‘trigger’ events which started the transitions into and out of ice ages and the ‘drivers’ which kept the change going.

Trigger: We believe that triggers for the ice ages and interglacial warming periods are small changes in the attitude of the Earth in its annual journey around the Sun. These ‘orbital wobbles’ are small and barely alter the average amount of energy reaching the Earth. But they do alter day length and summer length at high latitudes. Imagine what happens at the ‘snow line’ – the line of latitude at which snow just lies on the ground over summer. If summer lengthens or intensifies then this can cause snow to melt, which changes the albedo of the surface – making it darker and increases the rate of warming. Orbital changes trigger this kind of change.

Driver: When the Earth warms up microbes wake up and digest biological matter in the Earth and release methane (CH4) which reacts after about 10 years to make CO2 which stays in the atmosphere for hundreds of years – causing more warming and making the release of further CO2 more likely. So the ice core record shows changes in CO2 that correlate with ice ages. But these did not trigger the ice ages or interglacial periods. However, the changes in CO2 concentrations did drive the changes once they began.