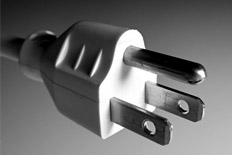 Normally the nucleus of atoms is ‘protected’ deep within the atom. But it is possible to split the nucleus by hitting it with (for example): a neutron; a very fast moving proton ; or a collection of two protons and two neutrons which is known as an ‘alpha particle’. When the nucleus is split, two new nuclei of two different atoms are formed.

There are a number of funny technological and scientific reasons for doing this, but the most important one by far is the extraction of energy. When we ‘burn’ wood we cause the carbon atoms to stick to oxygen atoms – and the resulting molecules move faster than the original molecules – i.e. they get hot. Similarly, splitting a nucleus of uranium causes the fragments to move very fast. But the amount of energy available is stupendous.

Burning one kilogram of wood might heat your house for an hour. If we could safely extract the energy from one kilogram of uranium (which would fit in a cube 4 cm x 4 cm x 4 cm ) there would be one million times as much energy – enough to heat a house for around 100 years! The stupendous energy density of nuclear fuel is the basic motivation for nuclear power.