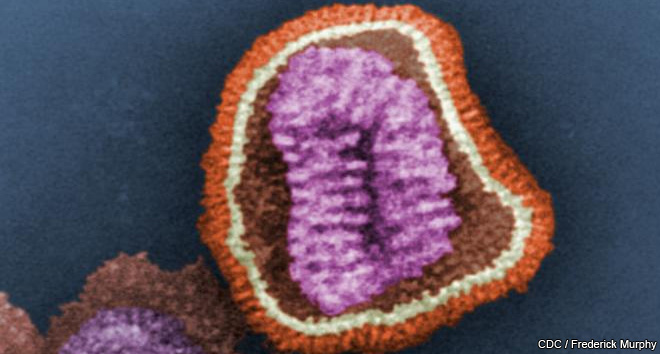 When we think of viruses mutating, we often think of the flu virus (influenza). This virus is particularly good at mutating and is even capable of passing from one species to another. This makes it very hard to eradicate flu and new vaccinations are developed each year to keep up with the newest strain. So why, and how does the flu virus mutate?

When the flu virus enters out body through sneeze or cough droplets, it has to enter our cells in order to reproduce. Unlike plant, bacterial or animal cells, viruses lack what they need to replicate and instead hijack our cells and use our replication machinery. The genetic material of viruses can be DNA, or a slightly different type of genetic material called RNA.

During replication of our DNA, errors can occur, but we’ve evolved so that we have mechanisms in place that makes this error-rate very low (cancer is an example of what happens when mutations do occur) – and therefore the mutation rate is low in DNA viruses. However, the flu virus is made of RNA, which our cells don’t replicate, and so the mutation rate is a lot higher. Viruses need this to happen in order to survive. This is because our immune system recognises the outside of the virus so that when it attacks again we can kill it. But when it mutates, this changes the outside of the virus so that our immune system doesn’t recognise it – and this is why people get flu every year.

This is how slight changes happen – but this isn’t enough to allow the virus to pass from one species to another. Flu viruses infect humans, pigs or birds – but it is only the pig which can be infected by all three types. When two viruses infect the pig at the same time, the genetic material between the two viruses can combine, making a completely different virus. 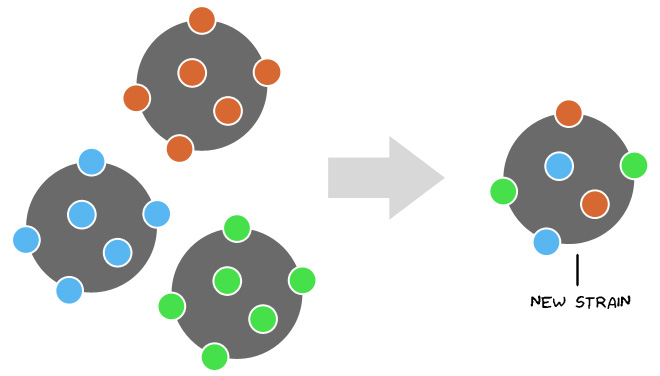 As no-one has immunity to this new virus, large outbreaks can occur, such as the 2009 swine flu epidemic and the deadly 1918 Spanish Flu epidemic that killed 3-5% of the world’s population (100 million at the time). There’s concern that the deadly Bird Flu strain, H5N1, – which isn’t very good at infecting human cells – could mutate or recombine with a mammalian flu strain, enabling it to efficiently infect humans. Hopefully if this ever does happen, it won’t be anytime soon!