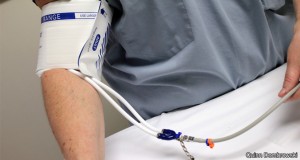 The human body typically contains about 5 litres or 8 pints of blood and all of this ‘stuff’ fits into the cardiovascular system, or ‘space’ that consists of all your arteries, veins and capillaries. Think of these as a system of pipes with just the right amount of fluid in to fit. When we have normal blood pressure, the heart maintains a steady flow of blood through these pipes.

Can we change the pressure of blood in our bodies?

What if we make the ‘space’ larger?

For instance, if we drink alcohol, which encourages the blood vessels to open up (called ‘vasodilation‘), then blood moves into the smaller capillaries near the skin making us go red. This has the effect of making the space bigger but with the same amount of blood, so the pressure required to pump it round the system is lower. If it drops too low (hypotension) then not enough oxygenated blood gets pumped up to the head, normally the highest point of the body, and the brain gets starved of the oxygen it requires. Finally, you would faint, which usually has the effect of placing the head on the same level as the heart (often the floor) and you would come round when your brain is ready again. (Remember that a high consumption of alcohol will lead to other problems that will cause an increase in blood pressure, so don’t think of it as a treatment.)

What if we make the ‘space’ smaller?

It is more common for the system of tubes that is our cardiovascular system to get smaller and our blood pressure goes up (hypertension) accordingly. There are many reasons for how this might happen. Consider a few examples and see how they relate to the change in the ‘space to stuff’ ratio:

Constantly eating a poor diet, rich in cholesterol, saturated fats and the like, leads to fatty deposits called plaques. These stick to the walls of the arteries, taking up space that the blood used to occupy in the system. Hence, over a period of time, the same amount of blood has to occupy a smaller space and the heart has to force the blood with a higher pressure. 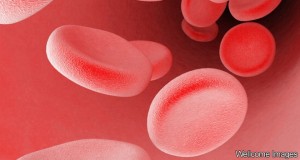 The action of smoking involves breathing in noxious particles and gases, such as carbon monoxide (CO). Red blood cells prefer to attach CO gas rather than oxygen (O2) leading to an inflammatory response in the lung. Because the lungs often deal with about 9% of our blood volume at any one point, this inflammation causes an increase in our blood pressure as blood tries to get through the swollen lungs.

Changing the amount of ‘stuff’?

The body is slightly salty, as you might recognise from tears. This balance of salt (NaCl) and water is carefully managed by the body. Obviously, if we eat too much salt then the body has to retain water to maintain a normal concentration of 0.9% w/v. Much of this extra water has to be stored in the blood, which has the effect of increasing the amount of blood in the same amount of tubes, and increasing the pressure in the system. It’s a bit like over-inflating a bicycle tyre. The more you air put into the fixed space, the harder you have to work.

Generally, these things don’t happen in isolation and there are many other consequences of having high blood pressure. Likewise, there are more than just these contributing factors, such as how much exercise we do, how thick our blood is (look for information on ‘sticky platelets’) or whether we have a family history of high blood pressure. Much is currently being researched into the causes and treatment of blood pressure so keep an eye on the latest news in the areas of coronary hearth disease (CHD) or ischaemic heart disease (IHD).