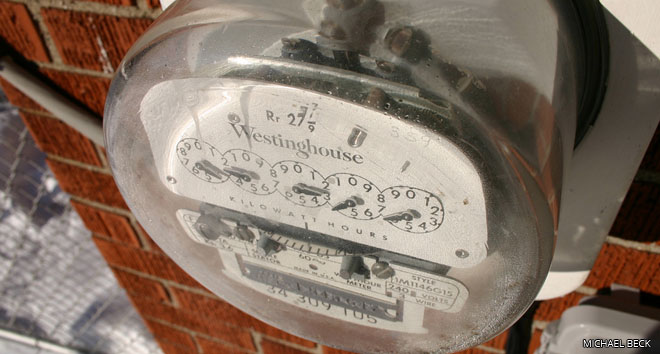 Three units (volt, ampere and ohm) describe the ‘flow’ of electricity which is described by analogy with the flow of water along a pipe under gravity. For water flows:

Coulomb: The unit of electrical charge is called a Coulomb. One Coulomb is a massive amount of electricity – the experiments with the balloons typically involved a few nano-coulombs and an individual electron has a tiny charge 1.6 x 10-19 coulomb.

Ampere (or ‘amp’ for short): When one coulomb of electrical charge per second flows along a wire then we say a current of 1 ampere is flowing. Because the charge on each electron is so tiny, this involves the motion of massive numbers of electrons.

Volt: When some electrical charge has flowed far enough so that its energy has changed by 1 joule for every coulomb of flowing charge, we say it has flowed through a ‘potential difference’ of 1 volt. So in a 9 V battery, the electrons leaving the – terminal flow ‘downhill’ to the positive terminal and for every coulomb of charge that moves along the wire it gains 9 joules of energy
Ohm: The electrical resistance of wire is measured in ohms. If it takes a voltage of 10 volts to drive 2 amperes of current we say the electrical resistance is 10÷2 = 5 ‘volts per ampere’ or 5 ohms.

Watt: A watt is a unit of power (not necessarily electrical) which specifies how much energy (joules) per second a process uses. If a 240 volt mains source passes 4 amperes through a resistance then it will dissipate V x I = 240 x 4 = 960 watts or just under 1 kilowatt.