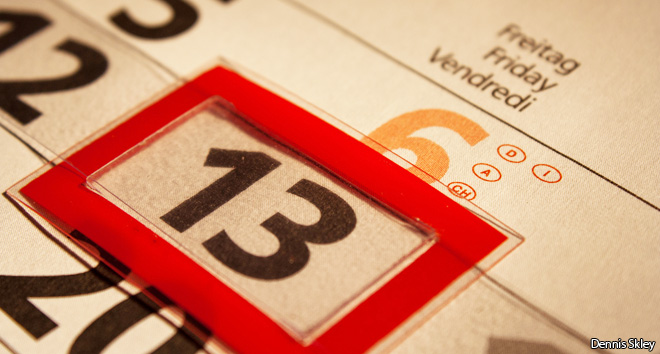 Friday the 13th – unlucky for some, lucky for others. My Wife was 13 on Friday the 13th, and has always professed 13 to be her lucky number. There is of course, no hard science driving the superstition at all, however it’s interesting the significance that some people assign to an otherwise arbitrary date.

The superstitions around Friday and the number 13 seem to have been around for time immaterial. One possible origin of friggatriskaidekaphobia comes from the story of Jesus’ last supper and crucifixion in which there were 13 individuals present in the Upper Room on Maundy Thursday and his death on Good Friday. It could be argued however that the superstition predates the Bible and dictated the numbers in the story above.

Either way, there are a number of facets to superstition. Tradition, taught behaviour, biology and religion all play their part in the maintenance and creation of such ritualisation, and we sadly don’t have the time to examine all of them now, so I’ll try to give you a very condensed version.

As humans, we appear to be very susceptible to superstition, if the number of lucky charms, lucky socks etc is to go by. There is some evidence to suggest that our genetics are partly to blame: In 1948 B.F. Skinner published an article in the Journal of Experimental Psychology describing an experiment into the behaviour of pigeons, his birds displayed a variety of repeated behaviours that appeared to be a ritualistic attempt to prompt a dispenser to release food, even though the dispenser had already been programmed to dispense at set time intervals regardless of the pigeons’ actions. Extrapolating, we can consider the nature of superstitious behaviour in humans. From an evolutionary perspective, there was probably a historical advantage in associating particular behaviour with reward/punishment – “if I shake the tree like this, then fruit falls” – for example. Where there are strong survival advantages to making correct associations, then this will outweigh the negatives of making many incorrect, “superstitious” associations. Our modern behaviour is a carry-forward of this evolutionary grasping for advantage.

Curiously it appears that whenever an individual performs an action expecting a reinforcement, the effect is self-reinforcing, regardless of outcome. If the individual is rewarded then it’s the superstition to thank, if no reward is forthcoming the action is often repeated, and at some point the person is rewarded, “thanks” to the superstition. You can consider this as a subconscious form of hedging ones bets, the superstition is unlikely to do harm to the situation so it’s worth trying, being the underlying idea.

Something that is very apparent, and that should be carefully considered, is peoples’ behaviour based on these false assumptions. In lotteries and draws for example, people are more likely to pick “lucky” numbers. If these “lucky numbers” come up then the prize will be shared between lots of people. Probability systems are entirely independent of peoples’ superstitions however, so if you pick 13, you are no less likely to win, but you are less likely to have to share the prize and are therefore “luckier” but at least one measure…