In general human beings are unable to pay attention to things which don’t change: try looking at a wall if you want to see what I mean. Human beings are not fascinated by stasis, but by change.

However some changes are so rapid that we just don’t notice them. For example you are probably unaware of the rapid flickering of the screen on which you are reading this.

And some changes are so slow that we think: “Nothing’s happening”. But exactly what we mean by ‘slow’ depends on context and experience.

In each case the changes are real, even though it can be almost physically painful to consider such slow rates of change. 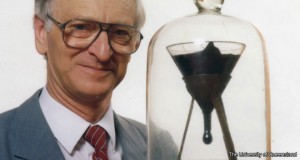 And it is in this context that I would like to draw your attention to a fascinating experiment situated in the foyer of the Physics Department of the University of Queensland in Australia: It is called the ‘pitch drop’ experiment and it involves the flow of a near-solid sample of pitch – roughly speaking the ‘tar’ that we use in ‘tarmac’ roads.

In 1927 Professor Parnell heated a sample of pitch and poured it into a glass funnel with a sealed stem. Three years were allowed for the pitch to settle, and in 1930 the sealed stem was cut. From that date on the pitch has slowly dripped out of the funnel – so slowly that now, 83 years later, the ninth drop is only just fully formed.

There are three things I really like about this experiment: