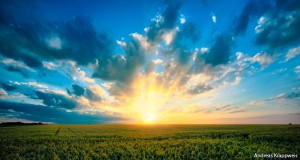 Light energy visible to the human eye falls in the electromagnetic spectrum between wavelengths of around 380 nm and 750 nm (1 nm = 1 billionth of a metre). Each wavelength within this range is seen by the human eye as a different colour:

When all wavelengths are combined together, light appears to be pure white. However if one wavelength is viewed in isolation it appears as the colour associated with that wavelength. This is what happens in the sky, where the blue wavelengths are split out from the rest and thus are visible.

As white light from the Sun enters the Earth’s atmosphere it contains waves of all visible wavelengths. Before reaching your eye though, it has to pass particles and molecules in the atmosphere. As the light passes through these molecules, the longer wavelengths (reds and yellows) generally are undisturbed, but the shorter blue wavelengths are reflected and scattered in all directions by the molecules thus making them visible to the human eye.

At sunset, the sky can turn orange or red because with the sun at a low angle, the light has a longer route to travel through the atmosphere and thus more particles to pass by before reaching the viewer. It also has to pass through larger heavy gas molecules that sit in the lower atmosphere that can scatter longer wavelengths than blue. The effect of this is that almost all of the blue light gets reflected away in other directions before it reaches the viewer’s eye, leaving only the red and orange spectrums, scattered by larger near-surface molecules visible. 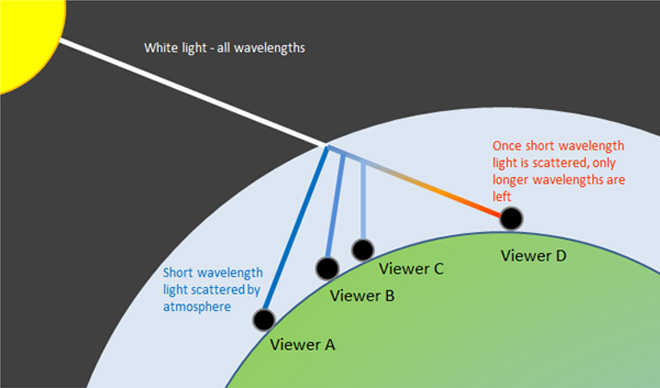 A single ray of light from the Sun and how it might be scattered and seen as different colours to viewers at different positions on Earth.