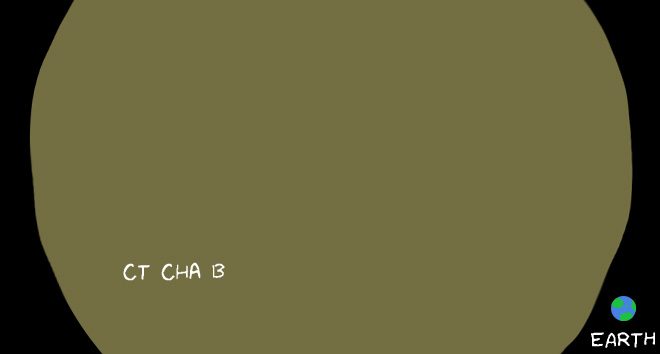 The biggest known planet in the Universe is named CT Cha b. Its companion star is called CT Cha and they can be found about 500 lightyears away in the Chamaeleon constellation in the southern sky. The CT Cha b planet is about 24 times the diameter of Earth and is about 5400 times more massive!

But if we are comparing planets in terms of mass, instead of size, then the biggest one is a planet called 2M 2206-20 b and is a mindboggling 9540 times the mass of Earth! In comparison, Jupiter, the biggest and most massive planet in our Solar System, is about 11 times the size of Earth and 320 times more massive.

We keep discovering new star systems and planets so it is possible that we will find yet bigger and more massive planets than CT Cha b and 2M 2206-20 b. Watch this space!