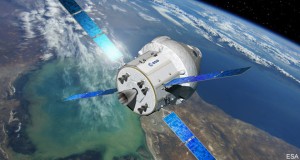 An orbit is essentially something which is in constant free-fall; if you drop something from a height it will fall back to Earth, but if you give it a sideways push as well, it will fall to Earth in a different place.  Suppose that the sideways push you give it is big enough that the object will travel beyond the horizon, and keep on going?  As long as the push is not so big that the object escapes the influence of Earth’s gravity, then it will be pulled in by the Earth, but pushed around by the push you gave it.  Eventually it would return behind you!

This, however, assumes that there are no other forces acting on your object, such as friction or air resistance.  So, in order to ensure that our satellite can keep travelling around the Earth without being slowed down (if it slows down then the sideways push will not be big enough for it to keep on being in free-fall beyond the horizon) we have to launch it higher than the atmosphere, into the region we call Space.  And then we have to give it a sideways push using the rocket that launches it, and its own propulsion system.

Incidentally, satellites which are in an orbit close to the Earth where there is still a little bit of atmosphere, have to take with them extra fuel to give themselves a boost in their orbit to keep the sideways push big enough to remain in free-fall; otherwise the atmosphere there is still enough to begin to slow them down and they would slowly fall back to Earth.