The tricky part of this question, is defining “space”. The Kármán Line at 62 miles (100km) is commonly accepted as the boundary between Earth’s atmosphere and outer space, and is roughly the lowest height at which a sustained orbit is possible (below this an object trying to orbit would fall back to Earth). Astronauts must cross this boundary to earn an astronaut badge (though in the early days of the program, an altitude of 50 miles qualified so some pilots achieved this by flying the sub-orbital X-15 rocket spaceplane). However, you would need to be significantly higher to fully escape Earth’s gravitational influence.

The American space shuttle (now retired) achieved this height of 100km at approximately 2 minutes 30 seconds into flight, then reached its initial orbit at an altitude between 300 and 500km generally at about 8 minutes 30 seconds into the flight. The Russian Soyuz rocket achieves similar times.  The International Space Station, the current primary destination for manned spaceflight, orbits at an altitude averaging 370km. 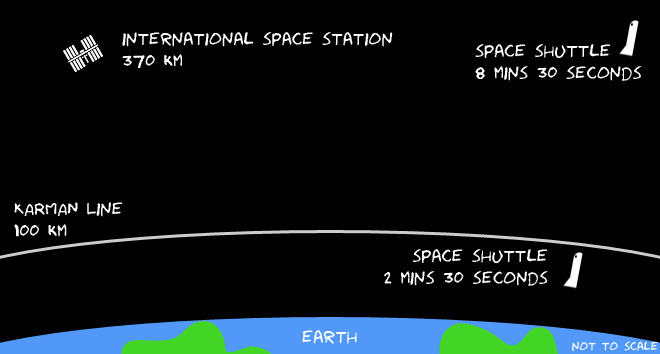 34 Comments - Leave your own