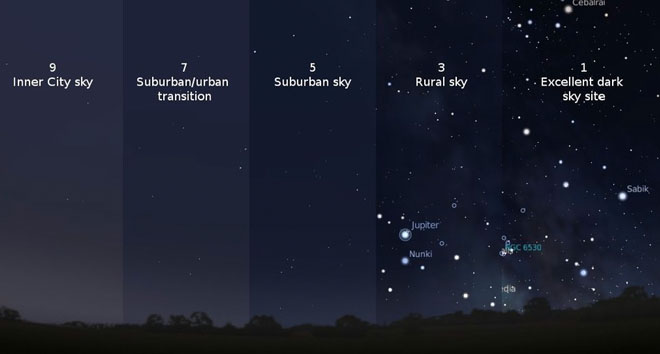 The above image, from Gizmodo, demonstrates just how much light pollution effects our view of the night sky.

On the left, the picture shows what the sky is like when looking up at night in a big city, and moving across to the right, the sky becomes much more interesting and alive as you move out of the city and into more rural locations. If you live in a town or city, it’s easy to forget how many stars, planets and galaxies are right above you.

According to a PBS article, it is estimated that as many as 80 % of all the people alive today have never even glimpsed the Milky Way, and some what astonishingly, when a power cut hit Los Angeles in the 1990’s a number of LA residents called 911 to report seeing strange clouds in the sky. They were seeing the Milky Way for the first time.

What causes it? It’s all down to light pollution. In towns and cities there are more lights than in the countryside, such as from street lighting and buildings. A lot of this light is wasted when it shines up, away from the ground – which in turn makes it more difficult to see the night’s sky. The stars are still there, you just can’t see them.

Why is it dark at night?