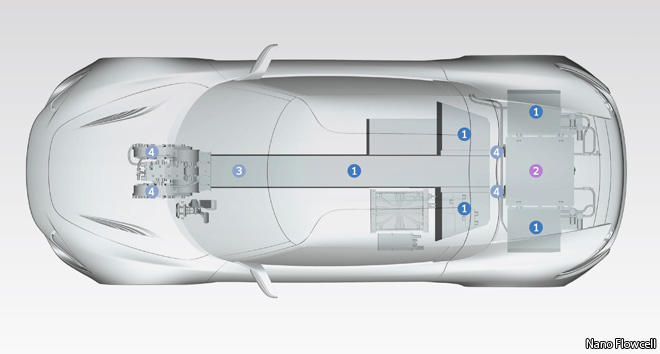 Redox flow batteries were patented in 1976 for NASA and the American space programme as part of a drive to advance energy storage technology for space flight. The 1976 patents have long since expired and are used by many others today. The flow-cell battery is a beacon of hope because it is an especially simple and effective storage medium for electrical energy. Flow cell installations are already in use as storage systems for domestic solar and wind power plants. They help capture the energy when it is generated and save it for use when it is needed.

Flow cells or flow batteries are a very modern form of energy storage device. Flow cells are chemical batteries, combining aspects of an electrochemical accumulator cell with those of a fuel cell. In the compact cell, a “cold burning” takes place, during which oxidation and reduction processes happen in parallel. The electrolytic fluids in flow cells – usually metallic salts in aqueous solution – are pumped from tanks through the cell. This forms a kind of battery cell with a cross-flow of electrolyte liquid. One advantage of this system in general is that the larger the storage tanks for the electrolyte fluid are, the greater the energy capacity. Simultaneously, the concentration of an electrolytic solution determines the quantity of energy that it transports.

The energy transfer within a flow cell is roughly the same as that in a good old-fashioned lead-acid car battery: charge passes between metal plates acting as positively and negatively charged poles via an ionisable liquid. One disadvantage of lead-acid batteries is that at 30 Wh/kg, they are relatively weak charge carriers; lead-acid batteries of a useful capacity are by nature rather heavy. Furthermore, due to the so-called “memory effect”, they rapidly lose charging capacity after 500 charging cycles. State-of-the-art lithium-ion batteries have a 4-times greater charging capacity at 120 Wh/kg and retain it for roughly 1.000 charging cycles and can be considered an acceptable temporary solution. Today’s flow cells already have around the same power-density, but are much more durable; they do not suffer from the memory effect.

Thanks to its nanoFLOWCELL®, a revolutionary further development of flow cell technology, nanoFLOWCELL AG will make it possible for the first time in history to power an automobile with flow cell battery systems. This especially compact and powerful flow cell battery delivers a driving range of up to 600 km in the QUANT e-Sportlimousine prototype.

Find out more about nanoFLOWCELL