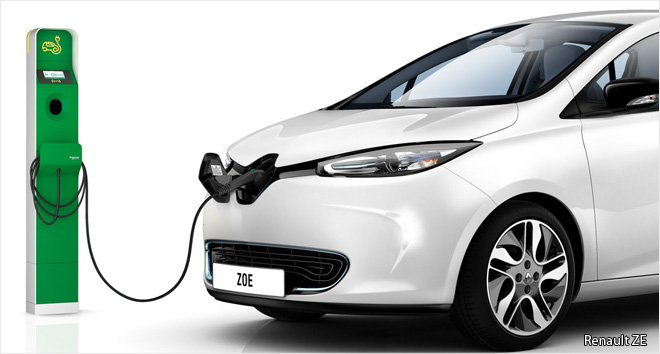 There are a number of different types of vehicle which use electricity as a means of propulsion. These can include ‘Hybrids‘, where an electric motor and battery is used at lower speeds but a petrol or diesel engine takes over to charge the battery and drive the wheels on longer trips, as well as ‘Range Extenders‘, where a petrol or diesel engine (or even a Hydrogen fuel cell) acts as a generator, to charge a battery and run an electric motor.

However, what most people refer to as ‘electric cars’ are ‘Battery Electric‘ or ‘Fully Electric‘ vehicles.

Whereas a petrol or diesel (‘internal combustion’) car burns fuel in its engine to release energy in order to move, a fully electric car replaces the engine with an electric motor and the fuel tank with a battery. The battery is charged from the national grid while the car is parked, and provides power for the motor when the car is under way. While electric vehicles have a shorter range than internal combustion models, they produce less pollution, offer lower running costs, and feature different driving characteristics, being inherently highly responsive, smoother and quieter.