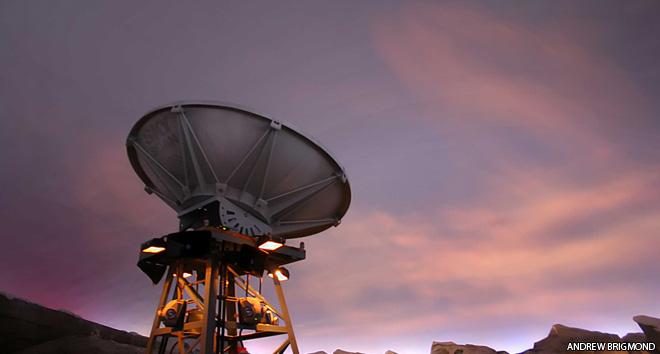 RADAR stands for Radio Detection And Ranging: a fairly accurate description of what it actually does. Radar systems use radio waves to find out the distance of an object, its speed and direction, and its height.

You’ll have experienced something very similar to the technique that radar uses: echo. When a loud noise is made in the right conditions – in a canyon, or down a well – the sound wave can reflect back off the surface (at a quieter volume), and make its way back to your ear.

This is the first phenomenon radar uses to detect objects, only it uses pulses of radio waves, rather than sound waves. When the radio waves are reflected off the object, a much quieter version hits the receiver, and the system can then translate this into an object’s distance (depending on how long the full cycle, from emitting the initial radio signal to receiving the response, takes).

The second phenomenon used by radar systems is Doppler shift. More commonly known as ‘red-shift’, you might think of astronomy when you hear about it, as it’s used to measure the speed at which other objects in the Universe are moving away (or towards) our Earth.

Radar systems use this effect: they can look at whether the wave reflected from an object is stretched or compressed, and from that, they can work out how fast an object is going. The bonus to using radar as opposed to sonar (the same thing but actually using sound waves, best used underwater) is that it travels at the speed of light, so it’s good at measuring distant objects. (Plus it doesn’t disturb the neighbours.)

Radar isn’t just used to track planes from air traffic control towers, but also to measure the speed of cars, track satellites, and map the Earth. A seriously useful system using the power of a simple radio signal – amazing stuff!