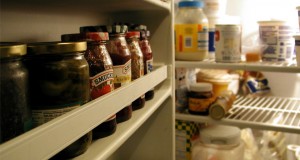 Originally, a few different reasons kept lights from being installed in freezers:

With developing kitchen technology – and an excuse to charge some more money for your appliance – most refrigerator manufacturers have begun installing LED lights in the freezer compartment as well, especially in freezer-on-the-bottom set ups where solid shelves are used less frequently.