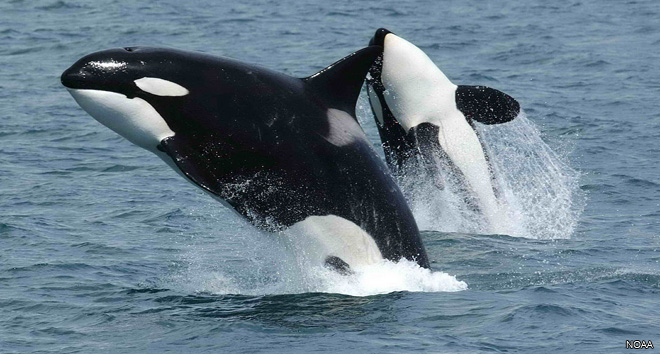 Killer whales hunt in lots of different ways depending on what food they are after, but there is one thing in common to all these hunts – and that is that they always hunt in groups in a very coordinated way.

For example some groups of killer whales (or orcas) herd fish by swimming in a line and forcing the fish onto beaches where they pick them off.  Some groups surround fish with rings of bubbles which panics the fish into jumping over the ring – straight into the waiting orca mouths!

Also some groups that eat seals and spy one on a small iceberg swim in a long line, and create a large wave with some great synchronised swimming and slapping of their tails.  This large wave then knocks the seal off the ice and into the sea where the killer whales can grab the seal.

28 Comments - Leave your own