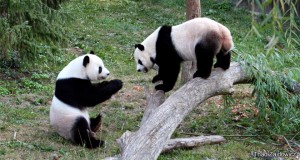 Giant pandas reach breeding maturity between four and eight years of age and they may be reproductive until about age 20. Female pandas ovulate only once a year, in the spring for only a short period of two to four days on average – which is the only time she is able to conceive.

Female giant pandas give birth on average after five months, however it can vary from 83 to 324 days after mating.

The mother will take good care of her cub if it is a single cub. However the mother will only choose the strongest to feed and will abandon the others if twins or triplets are born.

Giant panda cubs may stay with their mothers for up to three years before striking out on their own, this means a wild female, at best, can produce young only every other year; in her lifetime, she may successfully raise only five to eight cubs.

At birth, the cub is helpless, and it takes considerable effort on the mother’s part to raise it. A newborn cub weighs three to five ounces and is only 1/900th the size of its mother; about the size of a stick of butter. Except for a marsupial (such as the kangaroo or opossum), a giant panda baby is the smallest mammal newborn relative to its mother’s size.

Cubs do not open their eyes until they are six to eight weeks of age and are not mobile until three months. A cub may nurse for eight to nine months and is cub is nutritionally weaned at one year, but not socially weaned for up to two years.

Human impact on Panda breeding rates in the wild

The giant pandas’ naturally slow breeding rate prevents a population from recovering quickly from illegal hunting, habitat loss, and other human-related causes of mortality. They are classed as an endangered species, with approximately only 1500 – 3000 living in the wild.