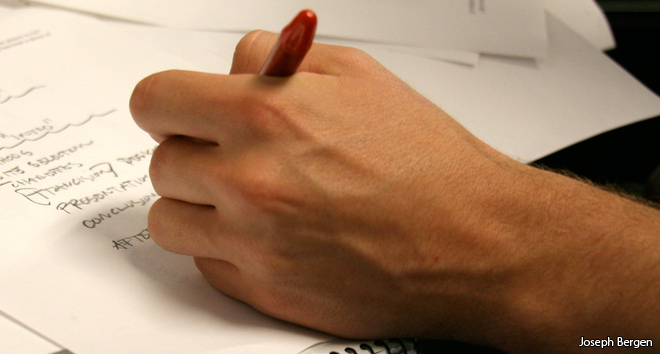 It is thought that many factors influence our handedness (our preference for using one hand over the other). Approximately 90% of the world’s population is right-handed, 10% left-handed and less than 1% ambidextrous.

The main factor influencing this is our genetics, although it is unlikely that a single gene will determine whether we are left or right handed. It is most likely that the expression of multiple genes during our development in the womb will determine our preferred side.

However our environment also plays an important role as is seen with many other human traits. Because the majority of the population is right handed many things are designed and built for right-handed people. This can make things difficult for left-handed people and for some tasks they may have had to learn to use their right hand (called multi-handedness). In the past there may also have been a social stigma attached to being left-handed with many schools expecting children to write with their right hand. For this reason people may have felt a cultural pressure to conform to right-handedness. Indeed 100 years ago only 3% of the population declared themselves to be left-handed. The fact this has now risen to 10% may be due to increased acceptance of left-handedness and current trends suggest this may continue to increase.