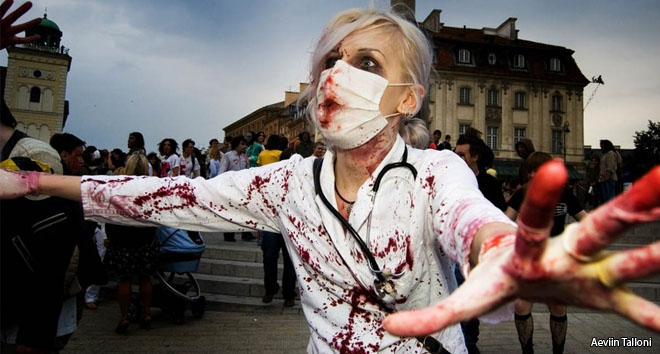 No. Not really. However there are one or two things that come close.

The first is a superstition/practice that can be seen in Haiti. There is a belief there that zombies are real, and several “cases” of people who have died, only to wake up days later in a mindless and controllable state. What is thought to have happened is that these zombies have actually been poisoned using a diluted form of pufferfish toxin (tetrodotoxin) which makes it look like the victim has died. After the burial has happened, they are then woken up from their dormant state. In addition to the tetrodotoxin they are also dosed with hallucinogenic drugs so that when they wake up they are in a trance-like state, and capable of being controlled.

It is allegedly possible to keep the victim in this state for years, and that due to a combination of cultural beliefs and the mentally altered state they can begin to believe that they are a zombie. Although not the decaying, brain eating sort from the movies.

But that’s not real zombification, it’s just being poisoned. Animals aren’t so lucky.

Zombie ants
Ants can become infected by a fungus called Ophiocordyceps unilateralis, which eat parts of the ant from the inside, whilst it’s alive. It also affects the ant’s brain, and causes it to find a leaf to clamp its jaws onto, permanently. The fungus then continues to eat the ant, until finally it causes a spike to extrude from the head of the insect from which it releases spores to further propogate itself.

Spiders
There is also a similar case in spiders, however this time the cause is a parasitic wasp called Hymenoepimecis argyraphaga. It starts when the wasp paralyses the spider, and lays an egg on it. This egg hatches and the larva begins its life sucking blood from the spider through small holes on its abdomen. When the larva is ready to pupate, it injects the spider with a chemical which forces it to build an unusual web, one which the spider would not normally weave. Once this is finished the spider sits motionless in the web, waiting for the wasp to emerge from its cocoon, suck the spider’s body dry and then fly off. Interestingly though, if the larva is removed after injecting the spider, the spider continues to zombie-like spin it’s unusual web.

Crabs
Crabs too are susceptible to parasites which can turn them into zombies. Sacculina is a type of barnacle that gets into the joints on crabs and injects itself into the soft body of the crab where it would normally incubate eggs. From this point on the crab is unable to moult, and as such cannot regrow appendages like it normally would. When a female Sacculina is implanted into a male crab however it gets even weirder. It alters the hormone balance in the crab to sterilise it, and then the crab’s body begins to alter it’s shape until it has the appearance of a female crab. It even releases the same sort of hormones that females release, as well as forcing the crab to do female mating dances. The crab then nurtures the growing Sacculina inside it in exactly the same manner as it would nurture its own young.