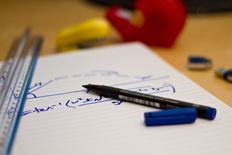 Laurie Winkless, a Higher Research Scientist at the National Physical Laboratory, answers questions on her career into science and her inspiration of why she chose to become a scientist. Laurie has a BA (Hons) in Physics with Astrophysics, a MSc in Space Science and has just started a PhD in Nanostructured Thermoelectrics!

What inspired you to study physics?

I’ve loved science since before I knew what the term meant! I was constantly asking questions as a child, and loved anything mechanical. Once I realised that I wanted to have a science-based career, my entire family thought I was crazy, but they encouraged it!

At the age of about twelve, I first read the book that has most shaped me. Its called “Yeager” and it’s about General Chuck Yeager, an amazing combat pilot and the first human to break the sound barrier in a jet called the Bell X-1. His story is an inspirational one. The son of a poor farming family, he joined the US Air Force at 18 and worked his way up through the ranks. He understood the importance and function of every component in all of the planes he flew (and still flies). He never accepted a “rough approximation”, he learned as much as possible about the “hows”, “whys” and “what ifs”.

His intimate, self-taught knowledge of the planes he flew saved his life on a number of occasions. People like Chuck Yeager show that Science and Engineering make you think differently than other subjects, you look at things critically and logically and it benefits you in all walks of life.

What is a typical working day?

I try to split my day in two, normally spending about half of the day writing reports on the projects I’m working on and reading scientific papers relating to my research and the other half on doing the science itself. I use lots of characterisation techniques for my nanomaterials work – Atomic Force Microscopy (AFM), Scanning Electron Microscopy (SEM), and Transmission Electron Microscopy (TEM), to name but a few. These techniques were all new to me when I joined NPL, but I have become a very experienced user.

I have meetings related to both the science aspects of our projects and the management and organisation aspects. I might go and speak to some people with experience in my area or order new bits of kit for the lab. Recently, I’ve been helping the European Space Agency (ESA) define their nanotechnology strategy, so my days have become filled with teleconferences and meetings…. which is ever so slightly less fun than the lab.

What advice would you give to someone following in your footsteps?

Work hard, and do science for the love of it. Doing science doesn’t limit your choices; it opens doors to you more than any other subject. A science degree is one of the most valuable degrees to hold, and if you work hard and do well, employers in all walks of life, from finance to pure research, will be fighting over you!

What’s the best thing about your job?

Getting to do something different every day. Also, getting paid for doing something I love is pretty cool. I have a really good work-life balance and am surrounded by good friends and family all over the world.

What do you love most about science and engineering?

That you can ask really irritating questions, and play with / damage cool bits of kit and no-one thinks badly of you! I just love the inherent curiosity a scientist or an engineer has, and the fact that that same curiosity is what has given us the Internet, missions to Mars and the iPod!

*Some of these answers first appeared on Bright Knowledge