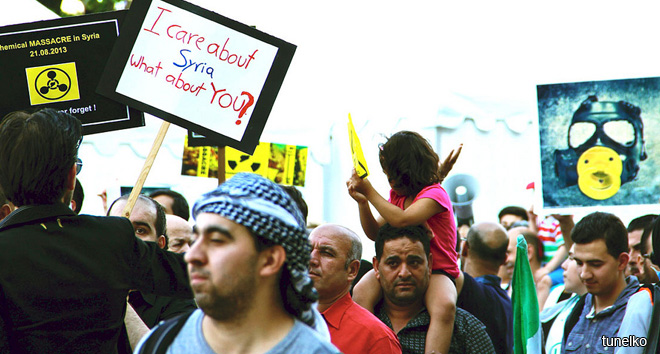 Protests in Germany against the chemical attacks in Syria

It is believed that on August 21st, a chemical weapon was used against civilians in Syria causing hundreds of deaths, with people foaming at the mouth and twitching. While the UN conduct their tests and interviews, and the rest of the world decides on their next course of action, we take a look at what chemical weapons are and how they’re used.

A chemical weapon is a device that uses chemicals formulated to inflict death or harm to human beings.

They can range from deadly weaponised versions such as Mustard Gas, commonly used in trench warfare during WW1, to less harmful chemicals such as tear gas, commonly used by police forces around the world, for example in riot control.

They’re odourless, tasteless and look like vapour, but nerve agents alleged to be used in Syria, such as Sarin, are considered to be the most toxic and rapidly acting of the known chemical warfare agents by the US Centre for Disease Control and Prevention (CDC).

As their name suggests, nerve agents attack the nervous system of the human body. All such agents function the same way: by blocking enzymes critical to nerve function. Poisoning by a nerve agent leads to contraction of pupils, profuse salivation, convulsions, involuntary urination and defecation, and eventual death by asphyxiation as control is lost over respiratory muscles.

Some nerve agents are readily vaporised or aerosolised and the primary portal of entry into the body is the respiratory system, however nerve agents can also be absorbed through the skin.