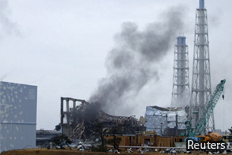 It’s been 6 weeks since the Fukushima nuclear accident, and news reports of the incident vary from the facile

to the mundanely exagerated

However, I have yet to read a clear web account of what has actually happened! The Wikipedia timeline somehow confuses rather than elucidates. A couple of weeks back I was lucky enough to receive a PowerPoint presentation by Mattias Braun from Areva. Using this and other sources I have attempted to summarise what actually happened.

Unit 4 was shut down at the time of the accident and a pool in the building was used to store spent fuel rods – of which more later. A key feature worthy of note is that  these units were more than 35 years old, and nearly at the end of their operating life.
The reactor structure was similar for each reactor. The inner pressure vessel was contained within a ‘pear-shaped’ dry containment vessel, surrounded by a torus-shaped so-called ‘wet well’. So, yes, everything was already ‘pear-shaped’ even before the accident. 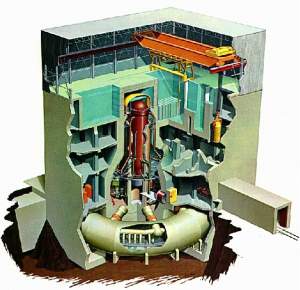 The structure of each reactor was similar 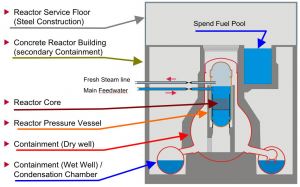 The structure of each reactor

11th March 2011: 14:46 The Earthquake struck causing an immediate ‘scram’ and all three operating reactors shut down safely. As I have described previously, this reduced the heat generated in the core from a breathtaking 1500 MW to something close to 100 MW – still a great deal of heat. Diesel generators started to provide power to circulate water to keep the cores cool. At this point the plant was stable and the operators were perhaps feeling relieved that things had gone at least roughly according to plan.

11th March 2011: 15:41 Now the tsunami arrives. With a height of 14 metres, it overtopped the defences designed for a 7 metre tsunami. The entire plant was disconnected from mains electricity, and the diesel generators and their fuel supplies were destroyed. The cooling system continued to cool the core powered by batteries and the operators began to cope with what had happened.

Reactor#1 At 16:36 – barely two hours after shutdown – the batteries failed. The  operators now had only one core-cooling option. This was to relieve the excess pressure in the reactor vessel by discharging steam into the ‘wet well’ where it can condense as long as the temperature is below 100 °C. This reduces the temperature and pressure in the  reactor vessel and provides some cooling, but inevitably lowers the level of water in the reactor vessel, eventually exposing the core material.