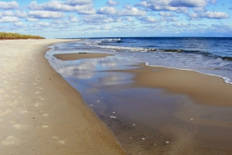 Human beings have been emitting carbon dioxide into the atmosphere in ever greater amounts – currently around 30 billion tonnes every year. And about half of that carbon dioxide remains in the atmosphere. But around one quarter – the exact amount is uncertain – is dissolved in the oceans and has caused an increase in acidity, changing ocean  pH from around 8.2 to around 8.1

Oh, you might be thinking – not so serious then; a change from 8.2 to 8.1 isn’t much of a change. Sadly, it is serious: it corresponds to a 25% increase in the number of ‘acid molecules’. So let me explain the pH scale, one of the worst-designed and poorly-named scales in science.

The ‘H’ in pH stands for Hydrogen, and scale seeks to measure the concentration of hydrogen ions in a solution. A hydrogen ion is a hydrogen atom which has had its electron removed. Its symbol is H+ and it consists of a single fundamental particle – a proton. It is uniquely mobile and reactive and the entire chemistry of acids and bases is all about the behaviour of this ion.

I had always wondered what the ‘p’ stood for in pH andWikipedia tells me that I am not the only one to wonder – its actual meaning has been lost in the mists of time! Originally it may have stood for ‘power’ or ‘potential’.

However rather than just recording the number of ions per unit volume, the scale seeks to make things ‘simpler’. Don’t you just hate that! 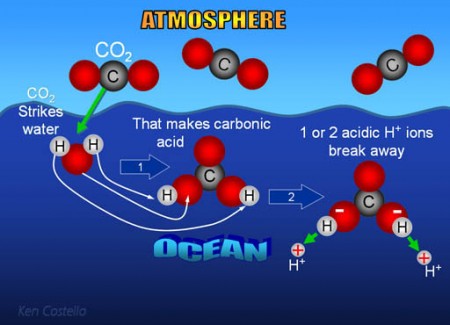 This 25% increase in ocean acidity is a direct results of the roughly 30% increase in atmospheric CO2. The way in which dissolved carbon dioxide causes water molecules to dissociate more than they otherwise would is complicated – so complicated that it is called Chemistry :-). But trust me: it does.

The acidification is what makes fizzy drinks taste interesting, but what is good news for sparkling water aficionados is bad news for the many kinds of organisms that live in the sea and which form the base of the food chain that sustains the ecosystems of the oceans. Animals that have shells will find it especially hard to cope if CO2 levels continue to increase. This BBC story describes research near underwater volcanos which shows how ecosystems are affected by increased acidity.

Please note: it is all much more complicated than I have made out! Ocean acidity varies from one part of the oceans to another and with depth and … well, there are many factors in play.  But very roughly the pH of mid-ocean sea water has decreased from around 8.2 to around 8.1  and the decrease will continue if atmospheric levels continue to rise.