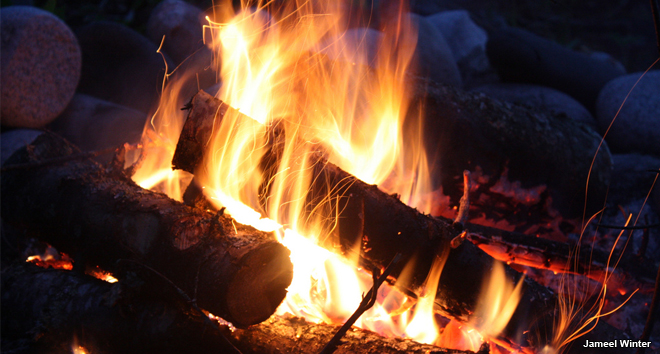 There’s nothing like taking a little catnap by the fireplace, feeling the heat, watching the flames, and listening to crackling sounds. But until you asked, I wasn’t entirely sure what this mesmerizing thing was or how it works.

I decided to find out from my friend Michael Finnegan. He’s a chemistry professor here at Washington State University.
In the 4th grade Finnegan got a chemistry set that came with a chemistry book. He read about how everything around us is made up of building blocks called atoms. He learned how atoms get together to form molecules. And when different atoms and molecules come together, they can react in different ways.

“What fire really is, is a whole bunch of fragments of molecules that have way too much energy,” Finnegan said. “So they are emitting that energy in the form of heat and light. That’s what we actually see.”

The super-fast reaction that creates fire is called combustion. In order to make it happen, we need a few things.
First, we need a source of heat. This can be a spark, for example. It’s something to get different molecules in our reaction moving fast and energetically.

The fuel might be wax on your birthday candle or newspaper in a fireplace. These items are typically made up of molecules that contain carbon and hydrogen atoms.

“One of the first things to notice about fire, if you look at a candle or fire in the fireplace, is you’ll notice the flames never actually touch the fuel,” Finnegan said.

That’s because heat turns some of those molecules from the fuel into a gas we can’t see. So, it appears the flame is floating.
If all we had were fuel and heat, we’d only have this gas. The final ingredient we need to make fire is oxygen.

“The easiest way to think about it, is the source of heat, or energy is tearing molecules apart so they can combine with oxygen,” Finnegan said. “If you’ve ever taken anything apart, you know what a mess it can make.”

And to understand why oxygen is so important in the reaction, we need to know a little more about how atoms work, Finnegan said.

Atoms have particles called electrons. Most atoms want more electrons. They can often get them by sharing electrons with another atom. If an atom shares an electron it also gains an electron. This also helps molecules form new bonds, too.

Usually the two oxygen atoms that make up our air share electrons. But when the gas from fuel mixes with oxygen atoms in the air, they stop sharing. Instead, they start forming stronger bonds with hydrogen and carbon. These stronger bonds mean more energy. The energy vaporizes more fuel molecules to keep the fire going.

Electrons help give off both the light we see and heat we feel from a flame. The next time you are sitting around campfire, or you blow out your birthday candles, remember, it’s all chemistry.