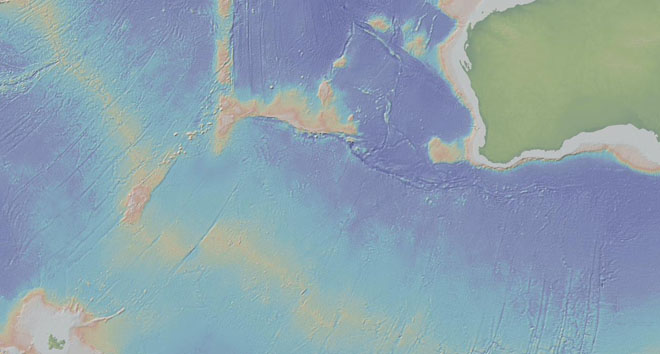 The search for missing Malaysian Airways flight MH370 in the southern Indian Ocean will be a difficult one. As well as being in a remote area of the ocean, the area has also never been mapped. Marine earth scientist Dr Neil Mitchell from The University of Manchester takes a look why;

There would need to be a strong economic or scientific reason to map an area of ocean floor of this size, as the following arithmetic illustrates.

Our main systems for mapping are multiple-beam echo sounders installed in the hulls of research vessels.  These systems collect typically more than 100 soundings for each ‘ping’ and cover a width of seafloor about 2-3 times the water depth.  That may sound impressive but, in the search area, a 4 km depth would imply that we can only map corridors 8-12 km wide.  For scale, one degree of latitude is 111 km, so we would need 100 survey lines to cover only 10˚, at a cost of many 10s of thousands of pounds per day surveying at 10 knots.  It is simply not economic and only limited areas have been mapped in this way where there has been a demonstrated need (e.g., around the U.S. coasts).

However, we know the rough physiography of the deep oceans from more widely spaced soundings collected over the years by research ships and government hydrographic agencies, often for purposes other than routine mapping.  These have been combined with measurements of the ocean surface from satellites, as the ocean floor distorts the ocean surface because of its gravitational attraction.  The above image was created using this combination1,2.

The satellite-derived data has a resolution of only ~10 km, but do reveal that the area of reported debris (>1000 km SW of Australia) lies on the northeast side of the Southeast Indian Ridge, a volcanic spreading ridge (much like the Mid-Atlantic Ridge).  I would anticipate the seabed here comprising a lot of fine sediment but with sporadic exposures of rocks (old abyssal hills and submarine volcanoes originally created at the ridge).

How will search teams find the aircraft’s black boxes?