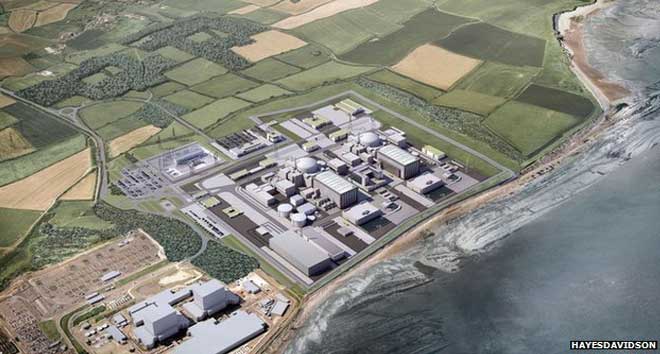 So the UK is finally ready to embark on building some new nuclear power stations. I – like most people – don’t know whether this is a good thing or a bad thing. But I do feel a sense of relief that we have finally made a decision.

My thoughts consist of three tangled strands concerning the price of electricity; the wider issue of energy costs; and the barely mentioned issue of carbon dioxide emissions. For this evening, let’s just look at the costs.

The power station, planned to begin operating in 10 years time in 2023, consists of two massive plants each generating 1.6 GW of electricity. The build cost is estimated to be £16 billion which French and Chinese government-owned companies will invest. Yes, this really is an investment backed by foreign governments.

The ‘strike price’ is the guaranteed minimum selling price of electricity generated by the stations and the figure agreed with the government is £92.50 per MWh – with the possibility that the figure will drop slightly if further reactors are built. This is equivalent to 9.25 pence per kWh – the electricity units on our electricity bills.

If the plants operate for 90% of time generating 3.2 GW of electricity then the guaranteed minimum income for the plant is £2.3 billion per year. Subtracting the operational costs – typically relatively low for a nuclear plant – then after 10 years of no income and substantial risk of construction problems and delays, the operators should generate around 10% per annum return on their investment for 35 years.

Is the ‘strike price’ right?

Well I obviously don’t know, but it is interesting to compare it with the current wholesale price of electricity which is quoted to be around  £55 per MWh. This price is dominated by the price of coal  which (as I write) is generating 43% of the UK’s electricity. Coal is not in short supply worldwide but it does emit lots of carbon dioxide into the atmosphere: nearly 1 tonne for every MWh of electricity produced.

I am not an economist, but in this context £92.50 per MWh doesn’t seem a crazy price for electricity which has very low associated carbon dioxide emissions. That doesn’t mean that it’s the best possible thing we could do. But it is probably not the worst either.

Michael’s article on Hickley was originally posted on his blog