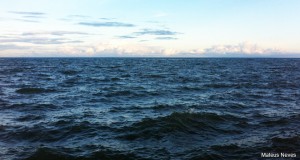 People were aware of the correlation between tides and the phases of the moon for centuries before Isaac Newton explained how such an effect could occur through the force of gravity. But things are not as simple as is normally told. There are two components to what causes the tides. The first is to do with gravity and the second can be summarised as the ‘bath tub’ effect.

Next time you are in a bathtub try moving your hand forwards and backwards so as to make the water ‘slosh’ from the front end of the bath to the back. If you move your hands at just the right time you will slowly be able to get many kilograms of water ‘sloshing’ backwards and forwards with very little application of force.

The tides are indeed caused a tiny gravitational effect, but over many rotations of the Earth the effect builds up until it causes the seas and oceans to ‘slosh’ about in their ocean basins giving rise to the tides. The local shape of the sea floor (called ‘bathymetry’ in a reference to the Greek word for depth and not baths!) can cause some places (such as the Severn estuary) to have exceptionally large tides