Salt levels around the world’s oceans are largely affected by how much, or little, fresh water is added to the ocean at different locations. For example, large fresh water rivers, such as the Amazon and the Ganges discharge enormous amounts of fresh water a day, making the ocean around it’s vicinity less salty. Fresh water sources also include ice caps melting around the Arctic and Antarctic as well as rainfall.

However parts of the ocean further away from such activity, especially where there is little rainfall, can have much higher salt levels.

NASA’s Aquarius mission, which aims to map the salinity (the concentration of dissolved salt) at the ocean surface to help improve our understanding of the Earth’s climate system, has produced the following map that shows salt levels in the World’s oceans. 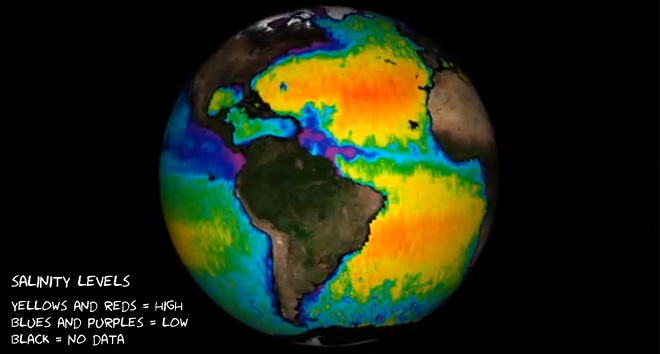 Data from Aquarius has unveiled a world of varying salinity patterns. The Arabian Sea, nestled up against the dry Middle East, appears much saltier than the neighbouring Bay of Bengal, which gets showered by intense monsoon rains and receives freshwater discharges from the Ganges and other large rivers. Another mighty river, the Amazon, releases a large freshwater plume that heads east toward Africa or bends up north to the Caribbean, depending on the prevailing seasonal currents. Pools of freshwater carried by ocean currents from the central Pacific Ocean’s regions of heavy rainfall pile up next to Panama’s coast, while the Mediterranean Sea sticks out in the Aquarius maps as a very salty sea.

One of the features that stand out most clearly is a large patch of highly saline water across the North Atlantic. This area, the saltiest anywhere in the open ocean, is analogous to deserts on land, where little rainfall and a lot of evaporation occur.