Cancer Research UK have announced what appears to be a startling and worrying statistic – that 1 in 2 people in the UK will get cancer at some point in their lives. The new statistic is a big jump from the previous figure that predicted 1 in 3 people would develop cancer.

Firstly, the UK’s cancer survival rate has doubled over the last 40 years – and half of patients now survive the disease for more than 10 years. The new figure has also been calculated in a different way than the previous 1 in 3 figure, with the new method being more accurate.

So why is it rising?

Researchers put this down to us being healthier and living longer. The overall risk to cancer is rising because of this, with the researchers behind the new statistics reckoning that about two-thirds of the increase is due to longevity. 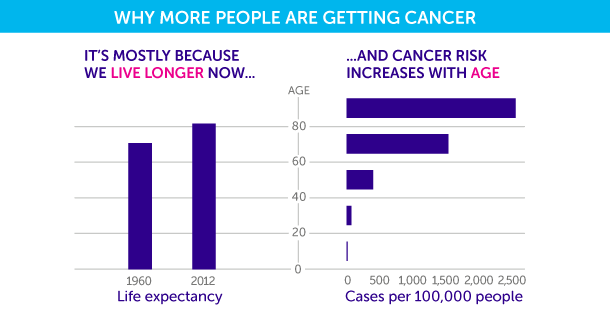 There are more older people in the UK than there ever were and the longer we live, the more chances for genetic mistakes to develop in our cells. These mistakes can then cause us to develop cancer.

The remaining one-third seems to be caused by how we all live our lives. For example, diets high in red and processed meats have contributed to the rise in bowel cancer cases. And more and more people are becoming overweight and obese in the UK, which raises the risk of developing a number of cancers. And our culture of sunbathing and using sunbeds is contributing to rising rates of melanoma skin cancer.

Smoking however is a partial success story, as the chart below shows. Smoking rates have been dropping in the UK for years, leading to a drop in lung cancer rates – at least in men. But women’s risk of lung cancer is still rising – so there’s still plenty left to be done. 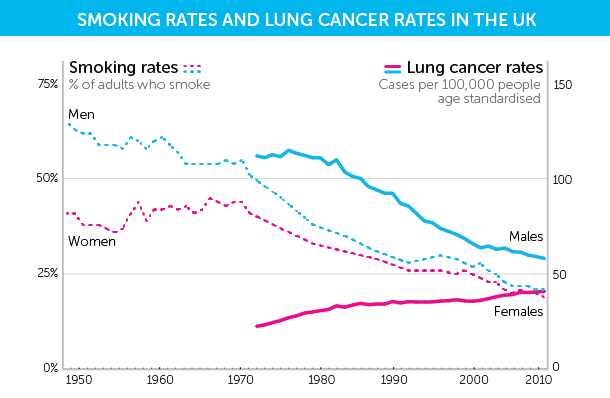