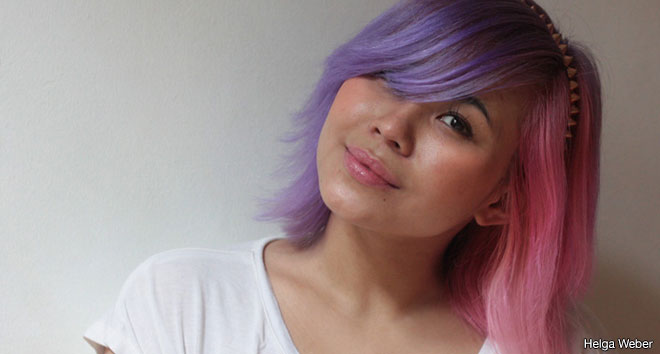 “Is it true… blondes have more fun?” Advertising for hair dye has played on our follicular insecurities since the 1950s, when Clairol slogans like this helped make hair dye seem more accessible – and acceptable – for every girl next door to use. By 1969 so many American women were using hair dye that the ‘hair colour’ field was removed from US passports. Why are advertising messages like these – and their modern equivalents – so successful at convincing us to buy these products? What drives us to change our natural hair colour?

Of course, humans have toyed with the keratin on their heads for millennia: a 2,000-year journey from goats’ fat and burned nutshells, via vitriol and lead, to Casting Crème and Sun-In. The significance and popularity of particular hair colours have varied between groups, generations and periods, but the intrinsic properties of hair might help us to explain why we are so attached to our monthly touch-ups and why hair colouring is a multi-billion-dollar industry.

According to Rose Weitz, sociologist and author of the book, Rapunzel’s Daughters: What women’s hair tells us about women’s lives, the significance of hair and hair colour in our lives rests on two factors – its malleability and its highly personal quality – that make it “uniquely suited for conveying symbolic meanings”.

Added to this, hair is one of our most public bodily commodities, visible and open to interpretation by others at a second’s glance. These essential factors are equally true for men and women – but Weitz believes that they are of greater importance for women, given that “women still are often evaluated based on their appearance”.

One view supported by Weitz is that hair is just another part of our bodies that we change to project a particular identity. The stereotypes surrounding particular hair colours are strong, and dyeing our hair may be rooted in a conscious or unconscious desire to identify with these stereotypes: feisty redheads, feminine blondes, nonconformist rainbow Mohican-wearers.

Although the associations between particular hair colours and traits are strong, they change through generations, and trends shift as a result. Even the widely accepted – and researched – idea that blond hair enhances female sexual attractiveness may be more recent than we think. Weitz argues that generations of western culture have associated blond hair with childhood and purity rather than sex appeal, with darker hair symbolising passion. Evidence for this crops up in the blond locks of virgins in Christian art and in fairy tales, where golden-haired heroines embody goodness and innocence. Look further back, and the connotations of blondness change again: Roman prostitutes could be identified by their dyed yellow hair.

However, many die-hard dye users are seeking to reverse the natural changes in hair colour associated with age, rather than assuming a completely different hair colour. Again, this aversion to ageing hair has not always been the case. Before the 20th century, when hair dye was even more unpleasant and short-lasting, there was far less stigma attached to grey hair.

As Weitz explains, “older women were expected to have grey hair, and those who dyed their hair risked ridicule if this was discovered”. However, the ‘cult of youth’ that gathered momentum over the 20th century was reflected in the increasing stigma surrounding grey hair for women and a boom in popularity of new, safer dye products.

Now, the bottle of Nice ’N Easy is seen by some women as an important tool in the workplace, allowing them to sidestep the stigma attached to ageing by camouflaging its signs. Of the 20 current female US senators, all aged between 46 and 81, none have (visible) grey hair. The male senators – those who still have hair – sport varying shades of grey, white and salt-and-pepper. Time magazine described this as a “great unspoken iniquity [that] officeholders don’t dare publicly discuss…for fear of seeming trivial”.

The culture surrounding hair colour continues to change, even if the chemistry behind it hasn’t moved on much since the 1950s. Increasingly, men around the world are using dye to wash away the grey. In 2007, the Wall Street Journal reported the growing role of hair dye in Chinese politics, where “the dye job appears to have become as commonplace as the Mao suit once was”.

Unlike many other male world leaders, 61-year-old Chinese president Xi Jinping sports a full head of black hair. Some have speculated that this boom in dye use among the upper echelons of Chinese society is due to China’s youthful demographics: 4 in 5 citizens are under 55. As such, age is seen as a major factor in promotions at work, and perhaps men reach for the dye bottle in an attempt to retain their chances of advancement as well as their youthful looks. It might also have other beneficial side-effects: manufacturers suggest that men dye their hair for the “bedroom and the boardroom”.

The chemical concoctions that change our hair colour can have a remarkably strong effect on our lives; they can help us in comply with the expectations of a youth-obsessed society, identify with a particular stereotype or try to remain afloat in a cutthroat corporate world. Unsurprisingly, the hair dye market shows little sign of shrinking.