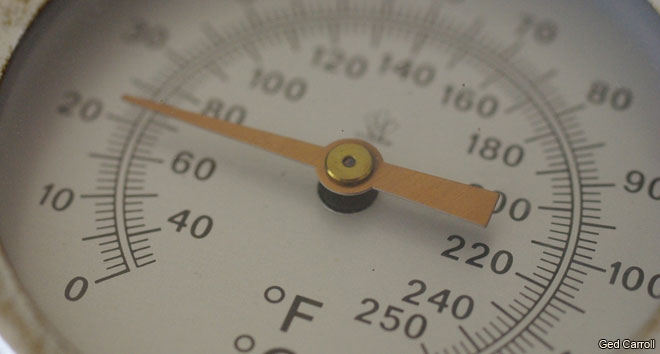 As winter tightens its glacial grip over the northern hemisphere, squeezing every ounce of warmth out of the waning autumn, the temperature will hit its seasonal low. But how cold can it get? The coldest place on Earth that has been measured is unsurprisingly found in Antarctica, not far off the South Pole. In 2010 it was found to be at least -93°Celsius. But this is still much hotter than what scientists achieved in the controlled environment of a laboratory at Yale University only a few months ago. They were able, for the first time ever, to cool a copper vessel to a temperature only a small fraction above absolute zero.

When we speak of absolute zero then we are referring to the Kelvin (K) scale. There are other scales such as Celsius (C) and Fahrenheit (F). 0°C is equivalent to 273.15 K. So, absolute 0 is in effect 0 K, which is -273.15°C. All matter is composed of atoms. These atoms are not static – they are jiggling about depending on how much energy they possess. If you freeze water, then the molecules of water will gradually lose energy and move about less and less as water turns into ice. And so, the temperature of a substance can be thought of as a way to quantify how much energy the atoms of a substance have. The higher the temperature then the more energy the atoms possess. Now, what if the atoms lose all their energy and essentially stop moving or jiggling? When this happens, the temperature will in effect be the lowest possible temperature, i.e. 0 K. This, however, can only be achieved in theory. The laws of thermodynamics and quantum physics dictate that atoms cannot be completely stripped of all their energy. As such it is impossible, by thermodynamic means, to cool a substance to absolute zero.

To say that absolute zero doesn’t exist, however, is equivalent to saying that infinity does not exist. We all know that infinity, by definition, cannot be reached. But does that mean it does not exist? This is a question more for philosophers than for physicists.

What’s the difference between heat and temperature?