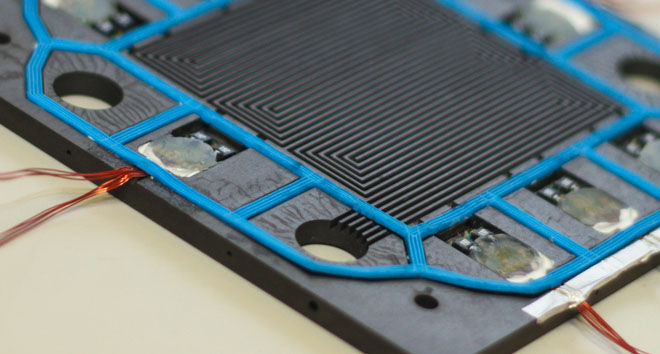 Climate change and sustainability issues are becoming increasingly widespread in recent years. It is argued that we need to start looking into alternative energy production, storage and usage to prevent negative effects on our health, and the planet’s. Hydrogen fuel cells have the potential to help with changing our current ways of thinking regarding the energy problem.

Principles of the fuel cell

A hydrogen fuel cell is a zero-emission electrochemical energy conversion device that directly uses Hydrogen (H2) and Oxygen (O2) gas to generate electrical and heat energy. The only exhaust emission from a fuel cell is water that is so pure, it was used for drinking water on the fuel cell equipped Apollo lunar space missions by NASA.

As with any electrical battery, there is an anode and a cathode, and an electrolyte material separating them. At the anode, H2 gas is supplied to the catalyst layer made of tiny Platinum (Pt) nanoparticles. This breaks down the H2 molecules, and leaves protons (2H+) and electrons (2e–). 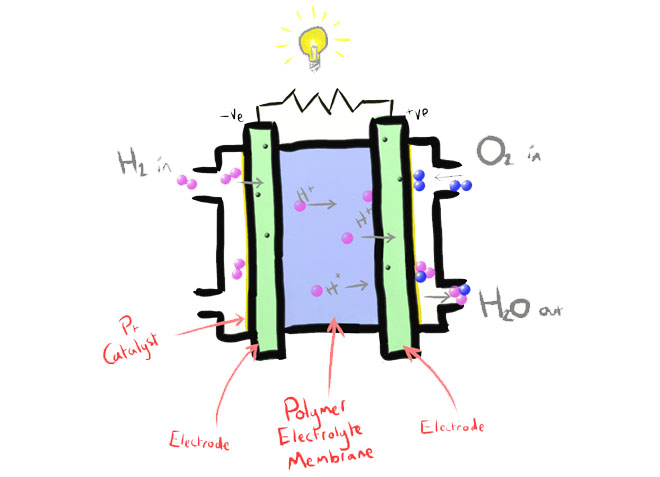 The protons can pass through the electrolyte material to end up at the cathode side of the fuel cell. However, the electrons are blocked and must travel around an external circuit to get to the cathode. This creates the electrical current that can be used for valuable work; such as spin a motor, or illuminate a bulb.

Whilst the above is happening, at the cathode, O2 is passed over the Pt catalyst and is broken down into two atoms with negative charge. The negatively charged atoms help pull the H2 protons through the electrolyte material, to meet the electrons that passed through the external circuit. Here, the electrons, H2 protons and O2 atoms meet and form the exhaust water (H2O), a little bit of heat, and useful electricity.

Both of the half-cell reactions can be expressed as below:

The electrolyte material at the core of a hydrogen fuel cell (HFC) is made of polytetrafluoroethylene (PTFE), which you might have heard of as Teflon®, used as a non-stick coating on frying pans. The PTFE core is hydrophobic, meaning that it repels water, which helps with the removal of excess water during operation. However, the core material is chemically modified to have side chains ending with sulphonic acid (HSO3) which is hydrophilic, meaning that it attracts water. This combination of a hydrophobic and hydrophilic material means that the electrolyte can remain hydrated, but expel excess water which could stop the reaction. This clever ability is fundamental to the transport of the H2 protons through the electrolyte. The H2 protons achieve this by grabbing on to an H2O molecule in the hydrated Teflon®, forming a hydronium ion (H3O+). This way they can catch a lift across the membrane to meet the electrons waiting at the other end.

Fuel cells are normally manufactured in thin slices, and can output around 0.7 volts, which isn’t very useful. So to create a useful amount of energy, cells are arranged in large stacks, like slices of bread in a loaf. This modular design allows the power output to be as high as desired, for the system it is intended to be put into.