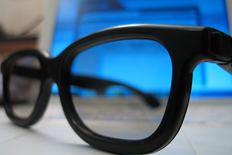 Normal 3 D vision works because our left eye has a slightly different view of the world from our right eye.

3 D glasses typically have the left-hand optic covered in red and the right hand-optic covered in blue. The 3-D material – a picture or a single frame of a film – has two images printed, one in red and one in blue. When we view this image through the glasses our left eye mainly sees the image printed in red and our right eye mainly sees the image printed in blue. Our brain interprets the differences between the  different images as being due to differences n perspective and reconstructs a 3-D view of the scene.