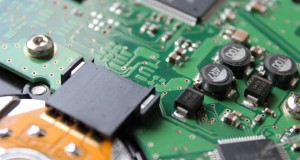 Transistors are electrical devices with three electrical terminals. They work a little bit like a tap works for water. Adjusting the tap handle (terminal 1) with very little force affects the flow of a large amount of water from Terminal 2 (the input) to Terminal 3 (the output).

In computers, transistors can be made to switch currents on and off billions of times in a second encoding digital information.