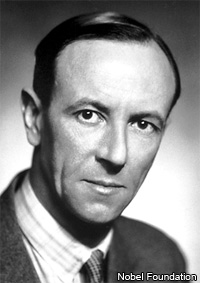 Neutrons were discovered in 1932 by James Chadwick working in Cambridge. He and his boss (Ernest Rutherford) had believed that a particle like a neutron must exist in order to explain their ideas about atomic structure. They were looking for something which had a similar mass as a proton, but electrically neutral.

For more than 10 years they tried lots of ways to get neutrons out of a nucleus so they could work out their properties. Eventually reports emerged of a ‘penetrating radiation’ that emerged from beryllium when it was bombarded with radiation from polonium. It appeared to be a ‘super-energetic’ gamma ray, but Chadwick thought it might be free neutrons blasted out of the beryllium nucleus.

The problem was that neutrons can go straight through most things – so how do you detect such a particle?

Chadwick designed an elegantly simple experiment in which he first showed that he couldn’t detect the radiation from the beryllium. Then he placed some wax between the beryllium and his detector – now he was able to detect something: protons. He reasoned that neutrons were about the same mass as protons and if a neutron scored a direct hit on a single proton (the nucleus of a hydrogen atom) then – like the cue-ball in snooker hitting a red ball straight-on – then all the neutron energy would be transferred to the protons in the hydrogen atoms. Since the wax was full of hydrogen atoms this is exactly what happened.

You can see it is not easy – working from an idea towards an experiment, and then explaining the results in terms of the new particle. That’s why he got a Nobel prize for his troubles.

Nowadays we can produce beams of neutrons and use them to study the structure of matter – like a sort of super X-ray machine.

7 Comments - Leave your own