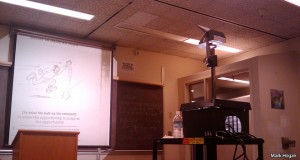 Overhead projectors, often found in offices and schools/universities is a variant of a slide projector, used to display static images to an audience using transparencies (a thin sheet of transparent flexible material), but, how do they project the colour black?

Well, the short answer, is that they don’t!

An overhead projector typically consists of a large box containing a very bright light, and on top of the box is a Fresnel lens and a transparent panel. A long arm on top of the projector contains a mirror, and another lens for focussing, redirects the projection onto a wall or screen. 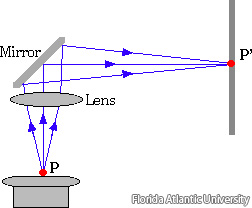 When the transparencies are placed on top of the projector, the light shines through the transparent part of the material, but is blocked by the black opaque writing which is printed on the sheet.

Because of this, when viewing black text for example on an overhead projector, the black areas are a shadow, created by the printed text on the transparency.