The goalline technology used in the 2014 World Cup promises to bring greater accuracy to the game. The system is called GoalRef, which is a very similar system to  Hawk-Eye which was introduced into the English Premier League from the 2013/14 season.

The technology works by installing 7 cameras per goal, often around the roof of the stadium. The images from each camera are processed with each other to pinpoint the ball’s location, effectively triangulating it’s position on the pitch. The system can work if the ball is only partially in an image, if the ball is muddy and even in poor weather conditions. 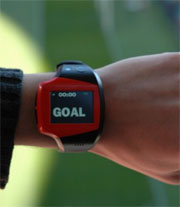 The system can locate the ball with only 2 cameras, however it has 7 to improve accuracy and reliability and to act as redundancy. According to Hawk-Eye, the system is ‘millimetre accurate, which ensures that no broadcast replays could disprove the decision’

As soon as the system detects that a ball has crossed the goal line, a message is sent instantaneously to the referees’ watch to inform them.