On Twitter, we got asked the following question from Kajal;

@askascientist why does moon reflects white light tho it gets yellow from the sun? 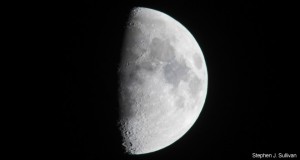 I can’t find any simple data swiftly about the moon’s spectral reflectance, but moon rock does look pretty neutral in colour, so indeed you might expect it to appear the same colour as the sun.

But… who said the sun is yellow? Japanese children usually draw the sun as red. The sun’s colour is a cultural construct rather than a physical one.

Physically the sun (well above the horizon) has a colour temperature of 5780 K which makes it a bluey-white.

Viewed from earth the sun can appear as anything from red, orange, yellow to white as it travels across the sky. The colour change is because atmospheric particles scatter the bluer end of the spectrum away from direct line of sight (which is why the sky is blue), and as the sun approaches the horizon, sunlight has to pass through more atmosphere. Similarly, if the moon is near the horizon, it may be seen as being yellow or orange depending on it’s position or how polluted the sky is.

P.S. Don’t ever look directly at the sun!