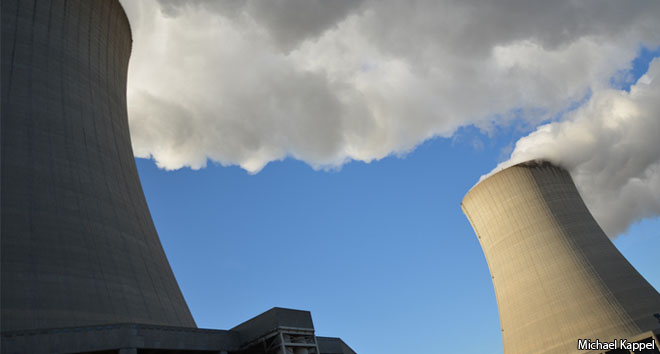 Let’s let go of the debate surrounding nuclear power for a minute or two, and delve into the truly awesome science within those massive power plants.

Like any other electricity generator, there’s a chain of events that happens, starting with the fuel and ending with that magical spark of electricity. The radioactive uranium core heats water into steam; the steam is a jet, which turns a turbine; the turbine is connected to a generator, which produces a spark.

So believe it or not, centuries later than the Industrial Revolution began, we’re still using the power of steam to drive our modern lifestyle.

Not only does that all-important steam act as the force behind the electricity generator, the water surrounding the reactor cores also cools them and keeps the temperature stable. (A “nuclear meltdown” occurs when the water tanks are damaged and the water drains away, making the temperature of the core spiral out of control.)

Let’s take a closer look at that core, as that’s where nuclear power really differs from other generating methods.

The heat that produces steam in a nuclear power plant comes from a process called nuclear fission. An atom splits in two, releasing heat energy as it does so.

Uranium is a naturally radioactive element that emits alpha radiation (two protons and two neutrons at the same time) spontaneously. What’s special about uranium, though, is that it can undergo induced fission – if a neutron is fired at it, it will absorb it, become unstable and then decay – producing both energy and more neutrons.

So inside a nuclear core, a uranium atom undergoes the natural radioactive process, decaying into a smaller element and releasing two protons and two neutrons. One of these neutrons then goes on to hit a neighbouring uranium atom, which then decays, producing energy and a couple more neutrons: and so a chain reaction of more neutrons, more decays and more energy kicks off.

In a reactor, the uranium is made into pellets, with them all arranged into rods, which are then bundled together and placed inside the water tank. Cleverly, control rods are also created that can absorb the neutrons and slow down the chain reaction, and these can be lifted up or lowered so that the plant operators can control the rate of reaction.

The uranium rods are extremely high-powered sources of heat, which then turn the water into steam, which is piped through a turbine and generates that essential spark of electricity.