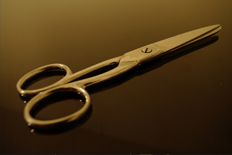 It is a very confusing term. In a sense every chemical reaction ‘splits’ atoms because it takes or adds electrons away from atoms. However the phrase would be more correct if we spoke of splitting the nucleus of an atom.

This can be done in a number of ways, but typically, it involves bombarding a substance with protons or neutrons or even entire nuclei of other atoms. Most of the particles don’t hit nuclei in the target but some do, and by interact electrically and through the strong force they can break up a nucleus.

Technologically the most important case is the fission (the scientific word for splitting) of some atoms of Uranium. Addition of a single neutron causes the entire nucleus to split into two or more parts. The fragments move enormously fast and release tremendous amounts of energy. The process is at the heart of both nuclear power and nuclear weapons