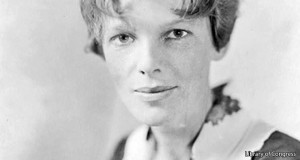 Amelia Earhart began her flying career at the age of 23, and became only the 16th woman to be issued a pilot’s license 3 years later. She made several significant flights, including:

Amelia Earhart set many of her aviation records in the Lockheed 5B Vega, which due to its sturdy and streamlined design, was favoured by pilots looking to set speed and distance records. On May 20th 1932, Amelia Eahart took off in her bright red Vega from Harbour Grace, Newfoundland, with the intention of crossing the Atlantic Ocean and landing in Paris just as Charles Lindburgh had done exactly 5 years prior.

However she ran into difficulty very early on, including thick clouds, ice on the wings, and a leaking fuel tank. To make matters worse mechanical faults caused her altimeter to stop working, meaning she was unable to tell how high above the ocean’s surface she was flying, nearly resulting in her crashing into the Atlantic Ocean.

Realising she was in danger, Earhart had to land in the first clearing she could find. At 1.46pm local time on May 21st, Amelia Earhart landed in Gallagher’s field near Londonderry, Ireland, having successfully flown 2,026 miles across the Atlantic Ocean in 14hrs 56mins. She was greeted by two farmhands who asked if she had come far, to which she replied,

She had broken several records on this flight including becoming the first woman to fly solo across the Atlantic, the only person to have flown it twice, the longest non-stop distance flown by a woman and a record for crossing in the shortest time.

The same journey today from St John’s, Canada to Derry, UK would take just 4 hours, 30 minutes. This assumes an average flight speed for a commercial airliner of 500 mph, which is equivalent to 805 km/h or 434 knots. It also adds an extra 30 minutes for take-off and landing. Exact time may vary depending on wind speeds.

Her previous aviation achievements were all leading up to attempting to circumnavigate the globe, which was to be achieved in several legs. After her initial effort failed due to damage to the plane, Earhart and her navigator, Frank Noonan, set out on July 2, 1937. However after completing two-thirds of the course, the plane mysteriously disappeared while flying over the Pacific Ocean.

The United States government spent $4 million looking for Earhart, making it the most costly and intensive air and sea search in history at that time.

It is still unknown whether they survived, and if so for how long. Recent evidence found on the uninhabited Gardner Island (now known as Nikumaroro) includes artifacts such as improvised tools, bits of clothing, a piece of Plexiglas the exact width and curvature of an Electra window, and a jar of branded cream from the same era.