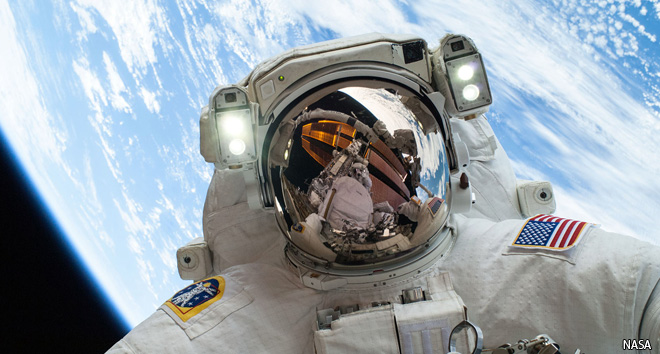 Tim Peake, the first official British European Space Agency astronaut, explains how it is a long process that can take up to 18 months before launch date. Prior to being accepted on his unique expedition, he attended a space school for four years that gave basic training in every aspect of life away from Earth. Learning all the essential skills required for a life in space, it was only when he landed a place to leave Earth that the training really became intense. Since last May, Tim has already travelled to the Russian astronaut centre in Star City, Tsukuba Space Centre in Japan, a two week survival course in Sardinia and NASA’s base in Houston, where Tim, his wife Rebecca, whom he has been married to for 14 years, and their two sons, both under the age of five, are now based. He’s also even lived in a cave with fellow astronauts to get used to living in close proximity with a team of people.

“During my training, I have spent a lot of time away from my family but it is normally four to five weeks or so at a time rather than the six months when I go on the expedition,” he explains. “My family are with me in Houston because 60 per cent of my training is there. We have done all sorts of things and learned about the actual Russian Soyuz rocket that we will be travelling on, we have spent time in Japan’s laboratory and we have lived in a cave for a week to learn how to deal with the pressure of being in a confined environment with a bunch of astronauts!

It’s been really interesting and I will be travelling to Canada soon to learn about the Robotic arm. That is vital as it grabs the vehicle when it docks at the space station.”

Tim has also floated freely in the cabin of a jet plane to experience the feeling of weightlessness and practised for space walks in a swimming pool in Houston that is, he says, the largest in the world.

You go for six hours at a time in a full pressurised space suit,” explains the charming astronaut. “You do a space walk and it’s extremely physically demanding. Most people will, in fact, be surprised at how demanding it is!

“You have to stay pretty fit.

“As for the weightlessness, it’s a wonderful environment to work in.”

Leaving a wife and children behind to go up into space can be a daunting prospect for some people but Tim says Rebecca has been incredibly supportive. She has also worked for the military herself and she knows the pressures that he will have to face, Tim explains.

She takes everything in her stride,” he adds. “We have been married for 14 years now and she was in the army herself. Of course I will miss both her and my boys terribly but we will still be able to communicate when I am away via email and the phone.

“Never did I ever think I would be in this situation. As a child, I was desperate to be a pilot and so I didn’t think I would ever be sitting here now talking about becoming an astronaut on a flying expedition. I can’t wait and I know I am lucky to be able to have the opportunity to go into space.

“Everything I am learning right now is so interesting…”

Live from Space season airs on Channel 4 in March 2014