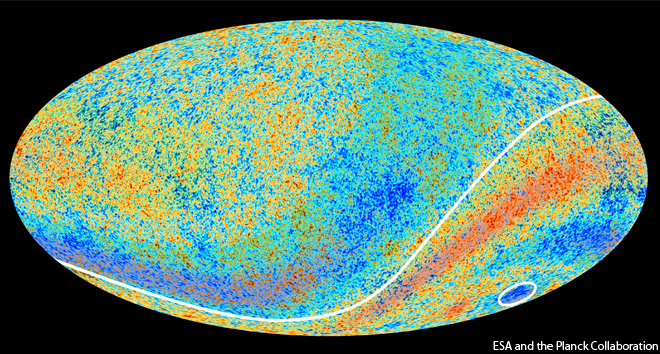 First of all I would call it an inference or estimate rather than a measurement, and even then it is not an easy inference.

Now the argument goes – if we see a star of this variable type in a very distant region, then if we measure the period of its brightness oscillation, then we know how bright it is absolutely. We then measure how bright it appears – and the ratio tells us how far away it is.

Using this technique we can estimate the distance to stars that are a very long distance away.

The speed of retreat appears to be proportional to their distance from us.

We extrapolate back to find that around 13.7 billion years ago, we would all have been in the same place – the big bang.

And that is how you estimate the age of the Universe using light. It is not easy or straightforward, but the inferences have been checked and double checked – and they do seem robust.

Image: The anisotropies of the Cosmic microwave background (CMB) as observed by Planck. The CMB is a snapshot of the oldest light in our Universe, imprinted on the sky when the Universe was just 380 000 years old. It shows tiny temperature fluctuations that correspond to regions of slightly different densities, representing the seeds of all future structure: the stars and galaxies of today.