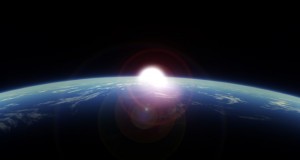 Our estimate of the age of the Sun comes from analysing its size, mass, and luminosity (i.e. brightness). We then apply our understanding of what powers stars and find an estimate of around 4.7 billion years old.

Our estimate of the age of the Universe comes from analysing the motion of stars and galaxies. As we look at objects further and further away we are looking at objects as they were when the light was emitted. We can see objects from which light has taken about 13 billion years to reach us, and we think these objects were formed less than a billion years after the ‘big bang’.