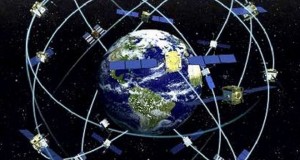 GPS, or Global Positioning System, is a navigation system using satellites orbiting the planet to pinpoint a user’s location. The idea was created in 1973 to replace existing navigation systems, and became fully operational in 1994 with the successful launch of the 24th satellite. Initially created for military applications, former President Ronald Reagan announced in 1983 that the system would be made available for civilian use upon completion. This has given rise to technology such as GPS trackers, SatNav systems, map apps for phones, and many more. There are 24 satellites orbiting 12,000 miles above Earth, each travelling at over 7,000mph and completing more than 2 orbits each day. These satellites send signals to Earth, which are received and decoded by GPS devices to provide a location. If 3 satellite signals can be received, a 2D position can be calculated (latitude and longitude), and if 4 can be received, a 3D position can be calculated (latitude, longitude, and altitude). How the signals work:

The GPS reader is able to decode the information being received from the satellites that it can ‘see’, in order to calculate your location. The image on the right shows the 24 satellites in orbit, and how a minimum number are kept visible at all times. Animated image on the right showing how the configuration of satellites leads to a minimum of 6 being ‘visible’ at all times (Source) As GPS is owned and maintained by the US Government, access to it can theoretically be revoked in hostile situations. This has led to other nations developing their own systems. Some such systems include:

This piece was written by Chris on behalf of RAM Tracking, to help you understand how GPS tracking works. Chris was curious about how a system that’s used for so many things worked, and hopes you find the information interesting!